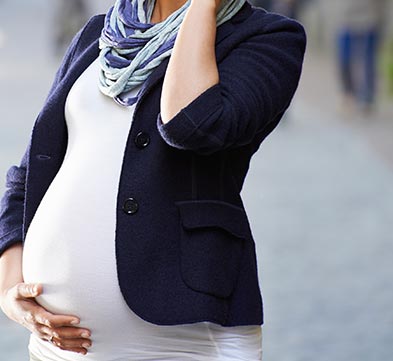 For the first time in more than 30 years, the Equal Employment Opportunity Commission issued new guidelines to make clear to employers that refusing to give reasonable accommodations to pregnant workers is illegal under federal law. For example, employers could no hold it against pregnant workers who are no longer able to lift heavy objects, could not deny them bathroom breaks or demote or fire them them when they announce their pregnancies.

The guidelines, issued Monday after a 3 to 2 vote along partisan lines on the commission, are intended to clarify a confusing array of federal laws, including the landmark Pregnancy Discrimination Act of 1978, that employers and courts have interpreted in different ways. One such case, Young vs. UPS, brought by a pregnant UPS worker who was denied light duty work and let go, is headed to the Supreme Court because lower courts have made contradictory rulings.

“There’s a reason we needed to update the guidelines, and that’s because this problem hasn’t gone away,” said Chai Feldblum, an EEOC commissioner who has been pushing for new guidelines. “This is an enduring problem in America’s workplaces – we’re not where we need to be with regard to fair, equal treatment of pregnant workers. We’re just not.”

In a dissenting opinion, Commissioner Victoria A. Lipnic questioned the wisdom of publishing guidelines when the upcoming Supreme Court case could make them moot. She said the EEOC is overreaching.

The new guidelines say pregnancy-related conditions can now be considered disabilities covered by the Americans with Disabilities Act, which entitles workers to accommodations at work. Lactation, a controversial and disputed matter in the courts, is now considered a medical condition. And a pregnant worker is now entitled to receive reasonable accommodations, like light duty work, even if she hasn’t been injured on the job, which is at the heart of the Young case.

Susan Rosenberg, a spokeswoman for UPS said that the company will review the new guidelines in the context of current company policies and the court case.

“The Supreme Court is evaluating the specific circumstances of that case and the laws at that time,” Rosenberg said. “I don’t know if [the EEOC guidelines] would have any bearing on it.” Young’s lawyers agreed.

“I don’t think the guidelines should have any effect on the case. The EEOC has had guidelines that courts have chosen not to follow and that’s been the problem,” said Sharon Fast Gustafson, a litigator on Young’s team. “The EEOC guidelines are helpful but it’s not the same thing as a Supreme Court decision and that’s what we need. We still need the court to answer this question for us in a definitive way.”

The guidelines also call for employers to provide contraceptives to employees, which Commissioner Lipnic said “needs to be thoroughly reviewed” in light of the recent Hobby Lobby Supreme Court decision. That decision granted an exception to employers on religious grounds.

The EEOC is also calling for mothers and fathers to have equal parental leaves for bonding, although the guidelines do suggest giving mothers additional “child birth” leave to recover physically. Both mothers and fathers qualify for unpaid leave under the Family Medical Leave Act if they’ve worked full-time for at least one year for a large company. But fathers typically have very little paid parental leave compared to mothers. Recent surveys have found that fathers could have anywhere from one day of paid leave to, on average, two weeks. The new parental leave guidelines apply to workplaces with at least 15 employees, part-time workers and even new hires.

“It’s clear we need to have changes in our social norms, so that it’s presumed men will want time off to bond with their newborn,” Feldblum said. “This helps us move toward that change in social norms.”

“Pregnancy discrimination cases are really the most overt type of discrimination cases we see,” Lopez said. “It’s absolutely baffling that some employers still don’t understand the requirements under the law. We just see some real doozies. And it’s frustrating to me, as a law enforcement official, that we keep having to file these cases all over the country.”

In one such case, Lopez said a 21-year-old courtesy shuttle driver was fired just before Christmas when she told her boss she was pregnant. “He said he thought she was a danger to herself or others, that she might cramp up or get nauseous, even though there was no medical evidence,” Lopez said. “The judge hit the roof and told the defense attorney: Your client knows nothing about women, much less pregnant women.’”

Lopez said that people tend to think discrimination cases are motivated by ill will, but with pregnancy discrimination, it’s more the power of stereotype about the capabilities of pregnant women at play. “There is often a paternal attitude that leads to discriminatory behavior.”

Tom Spiggle, an attorney in Arlington, Virginia, who handles pregnancy discrimination claims, said that low-wage workers who often experience the most blatant discrimination. But they’re not the only ones. And he’s taken pregnancy discrimination cases before women even become pregnant. One client was repeatedly told that she was being groomed to take over for the CEO of her company. But once the CEO asked her if she planned to have another child after her first, and she’d said she probably would, she was immediately shunted to a lesser position. “They took away all her direct reports, they gave her less responsibility,” Spiggle said. “You couldn’t get more blatant than that.”

Cynthia Calvert is an attorney who tracks family responsibilities discrimination lawsuits, which have also been climbing. She said that although the Supreme Court case will ultimately decide how exactly to interpret federal pregnancy discrimination law, the new EEOC guidelines are “persuasive.”

“Employers are really going to have to think twice before denying light duty to a pregnant worker,” Calvert said. “They’re rolling the dice and assuming the Supreme Court will disagree with the EEOC, which I’m not sure is a good assumption.”