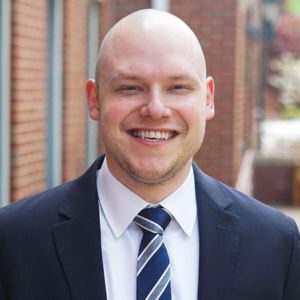 A Moral Minefield: Resolving the Dispute Over Legislator-Led Invocations (53 Wake Forest L. Rev. 601)
Bio
Outside the Firm
Bio
Robert is a passionate and dogged advocate who has dedicated his career to fighting for workers’ rights. He has extensive experience representing employees before federal and state courts, as well as federal, state, and local administrative agencies. A North Carolina native, Robert is known to have a calm and warm demeanor but has little patience for bullies, liars, and gamesmanship. Prior to joining The Spiggle Law Firm, Robert worked for a boutique law firm in Cary, North Carolina representing workers individually and in class and collective actions for a variety of employment issues, including wage and hour violations, FMLA claims, wrongful termination, discrimination, and retaliation. While Robert worked on some of the most sophisticated and complex civil litigation during his time here, he is most proud of his pro bono representation of a client before the North Carolina Board of Review. Robert’s efforts in this matter resulted in a reversal of an unfavorable lower-level appeals ruling, thus staving off bankruptcy for his client. In another life, Robert had a successful career in sales and management working for one of the largest telecommunications companies in the country. He achieved multiple top sales awards and was selected for a prestigious leadership development program. His proudest moment was seeing his team achieve first-place in annual sales for the region during his first year in management.
Outside the Firm
Affectionately known among his friends and colleagues as “Tucci,” Robert enjoys spending time with those closest to him and has an eclectic taste in interests and hobbies. Robert grew up playing Suzuki violin, viola, and has just recently delved into the exciting realm of cello. You might say that strings run in his blood. He also enjoys attending the ballet, symphony, and other performing arts. For the outdoors, Robert enjoys skiing, hiking, kayaking, and tennis. You might also find him relaxing at a local brewery or vineyard. He also has a deep appreciation and love for music, film, and television, especially the Red Hot Chili Peppers, the Coen brothers, and Game of Thrones. He even has a Star Wars-themed Christmas tree, complete with a Death Star tree topper. But above all, Robert has a need for speed. He once upgraded the clutch, flywheel, suspension, and engine components on his car, by himself, for fun. If you manage to get him talking about the legendary BMW e39 5-series chassis, brace yourself.
Submit Your Booking Request