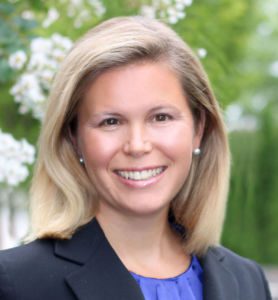 Bio
Outside the Firm
Video
Bio

Besides an undergraduate degree in Economics and Foreign Affairs from UVA, April received her Juris Doctor degree from the UVA Law School in 2002. She didn’t stop there, however. She earned her MBA from the Darden Business School at UVA in 2012 – while also working full-time.

During her academic career, April was an Echols Scholar and a Distinguished Major in Economics, as well as named to the Order of the Coif. Post-graduation, she clerked for two Federal judges – Judge Robert Beezer of the Ninth Circuit Court of Appeals in Seattle and Judge Susan Bucklew of the Middle District of Florida in Tampa. She has also been an instructor of legal research and writing, and she is licensed to practice law in three states and the District of Columbia. An excellent legal writer and proven trial attorney, April is a former prosecutor with 40 cases tried to verdict, 25 of which were tried before juries.

Around the office, people say April is open, friendly, a good listener, and easy to talk to. Most importantly, April offers her clients straightforward advice and genuinely cares about them. She’s known for being relaxed in casual settings but can become assertive in the courtroom when the case requires it.

April is hardly a timid type who sticks to a routine. In 2006, she traveled around the world for four months with a backpack – solo. Her itinerary covered four continents, including Hong Kong, Thailand, Singapore, Kenya, Tanzania, South Africa, Argentina, Chile, and New York. Her favorite places to travel? The dissimilar countries of South Africa and China.

April has also run five marathons in three cities and lived on the Lawn at the University of Virginia, which is the original academic village designed by Thomas Jefferson. It’s considered an honor to live there, but there are no air conditioners or bathrooms in the rooms!

April also has a passion for the arts, sometimes performing as an opera singer and lending her voice at weddings.